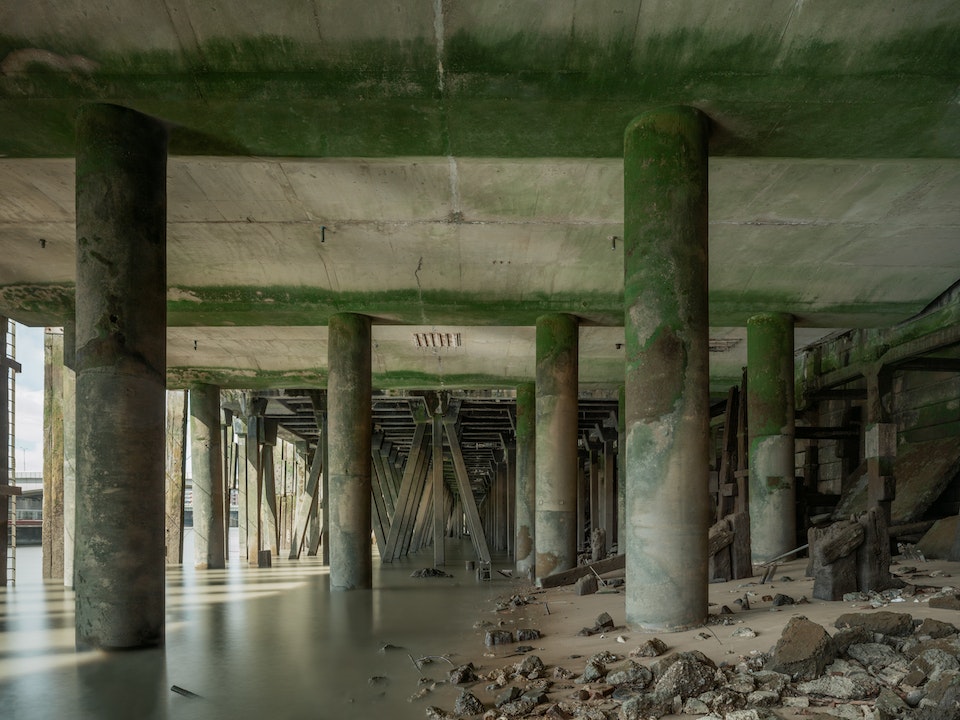 Limited edition prints and publication
Available from the gallery or online here.

An exhibition of photographs of monumental structures on the Thames foreshore by James Retief, part of the London Festival of Architecture 2022

The series of large-format prints provide a new and disorientating perspective of London. They are being shown as part of the London Festival of Architecture 2022 and will be on display from 11 June to 26 June at the Deptford gallery.

James began in early 2019 to explore the epic spaces underneath structures such as wharves and piers, revealed twice every day as the tide drops. He has captured these ‘tidal rooms’ from foreshore level, revealing their accidental yet powerful beauty. While the structures were designed solely to support activities above – such as loading and unloading ships – the spaces enclosed underneath are unwittingly majestic, often on a spectacular scale.

Careful planning was vital to capture the banal magnificence of these enigmatic spaces. The specific height of the tide is used compositionally, along with the ethereal rendering of water produced by a long exposure. Images were usually taken during falling tide in early morning light, where the soft light reached deep into the ‘rooms’.

While much of London has become increasingly sterile, the foreshore remains messy and an ever-shifting terrain. It is a largely forgotten landscape that feels peripheral despite being within the city centre.

James hopes that the images will stimulate debate about the meaning of public space in a city that is increasingly defined by private developments and surveillance culture. ’The theatrical monumentality of these utilitarian structures provides a rich backdrop for public life,’ he explains. ‘There’s the sense of an empty stage full of civic potential, with clues as to what truly public space can aspire to achieve.’

Limited edition prints will be available from the gallery and online.

A limited edition artist booklet, with introductory essay by architectural curator and lecturer Dr Corinna Dean, founder of the Archive for Rural Architecture, will also be available from the gallery and online.

Please contact the gallery for information about opening times, or see the website for more information, www.garethgardner.gallery

We are grateful for the support of Nielsen Frames in producing this exhibition.

James Retief is a British photographer based in London. Having graduated in Architecture from London Metropolitan University, he has since transitioned to focus on photography which he considers an essential tool in communicating and distilling complex subjects into precise and evocative imagery.

Working on both personal research and commissioned projects, his images are regularly published in the major photography, architecture and design magazines.

In 2021 Retief received the Judges Award in the international ‘Art of Building’ competition with his depiction of the mid-renovation Queen Elizabeth Tower – commonly known as Big Ben – shrouded in scaffolding, titled 'The Value of Time’. He lives on a boat in Greenland Dock, South East London, that rises and falls with the Thames tide.