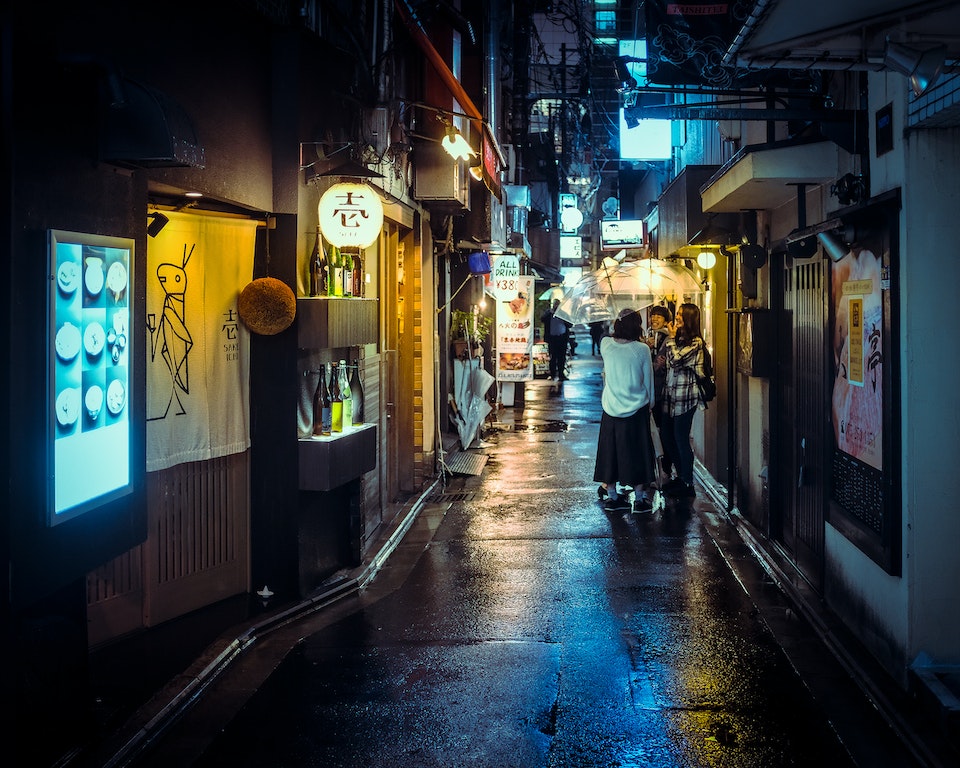 The latest exhibition at Gareth Gardner Gallery is Japan Nights, a series of neon-drenched images of Japanese cities by graphic designer and photographer Tim George. We sat down with the London-based creative to discuss his inspiration and passion for Japanese culture.

Gareth Gardner Gallery (GGG): What draws you to Japanese cities at night?

Tim George (TG): I simply love so many aspects of Japanese urban life, the design of nearly everything appeals to me. From the compact kei cars to the elegant houses, from the shinkansen bullet trains to the endless rows of gachapon machines, dispensing crazy collectable toys in capsules. I love the way the shops, restaurants and bars are stacked on top of each other, creating a truly vertical city, towering above the narrow streets that wind below. However all of this seems to take on an even more alluring look at night time. A huge part of it is the lighting. There are neon signs absolutely everywhere – and I don’t mean cheap, modern LED signs styled to look like neon, I mean the real thing, gently humming and flickering overhead. It gives off a warmth that modern lights can never match, and the saturation seems to pervade the whole city. And it looks even better in the rain.

GGG: Tell us about your interest in Japanese culture and cities.

TG: Although I was initially enticed by the image of Tokyo as a huge, futuristic metropolis, once I visited I was more impressed by the quiet, ordinary type of life that is lived there. The level of cleanliness and tidiness in virtually every corner of the city is something to behold. There is no litter or graffiti, and so many people decorate their houses with such care – even if they only have a tiny space in which to do so. Beautiful displays of flowers or ornaments can be left on the doorstep or the windowsill, with no threat of theft or damage, and I think that’s a really wonderful thing. I also love the efficient, compact nature of urban living that seems to be the norm. People don’t need much space; they get by with a small house and embrace a very neat, humble way of living. This feels like the complete opposite to the Western aspiration of wanting more, more, more.

GGG: Why do you think Japanese architecture/urbanism holds such interest to UK designers/architects?

TG: I think it is a fascinating mix of two very different things at once. On the one hand, you have the concept of “visiting the future”, with all the technology, noise and chaos that a modern city like Tokyo entails. But you also have a culture that is deeply rooted in a respect for nature and traditions; one that encourages a quiet, contemplative existence. The Japanese approach to design embraces simplicity, using quality materials and doing more with less – something I very much aspire to.

GGG: Do you have any plans to return?

TG: Yes I’d absolutely love to. However I’m also thinking about other Asian cities because I love the of mix modernism and tradition in other cultures too, not just in Japan. For example, I really enjoyed Bangkok which I visited in 2018. Hong Kong is high on my list, along with Shanghai, Singapore, Taipei, Seoul… there is quite a few!

GGG: What do you think your work says about Japanese cities?

TG: I hope it captures some of the excitement I felt growing up and looking at these places from afar. I think what I’m most pleased with in this series of images is the sense that they are dreamy or unreal, maybe even "hyper-real". I deliberately emphasised the saturation of all the neon colours to make them feel like a painting or a computer render. Looking at them now I almost feel like I can’t have been there, standing in those streets. They feel too perfect, like a stage set or a backdrop in a video game.

GGG: What are your formative influences, such as photographers you like and films that inspire you.

TG: In terms of the Japanese obsession, the biggest influence upon me growing up was Lost In Translation. I was 17 when that film came out and it made such an impression on me, Tokyo just seemed this incredible, intoxicating cityscape and I knew that one day I would have to visit. In terms of photography however, my earliest inspirations were American – William Eggleston and Stephen Shore. I have so much admiration for their ability to capture the banality of everyday life and transform it into something romantic and poetic. Lastly, I feel it is worth mentioning two contemporary photographers who are shooting in Japan right now and making incredible work – Ben Richards and Liam Wong. In particular, Liam’s book TO:KY:OO was a huge influence on how I approached photographing Japan.

GGG: Do you have future photography plans?

TG: Although this series was a success for me, and I would love to do more futuristic urban projects overseas, the last 18 months have obviously confined me to my home. So I have been studying London in much more detail than I ever did before, and I think something unmistakably English might be my next project.

GGG: How does your background in graphics/layout/brand influence your photography?

TG: In my earlier years of photography it heavily influenced both my choice of subject matter and composition. I would almost exclusively shoot flat, rectilinear scenes, with everything neatly composed at right angles, and most of the time some typography would be a key part of the image as well. Shop fronts were a prime example of this. I still shoot in this way, although not all the time, and I see it as almost a mirror to the process of creating a layout on the page, which is what my role as a designer involves.

Limited edition print sales of the images featured in the exhibition are also available, please get in touch for more details.