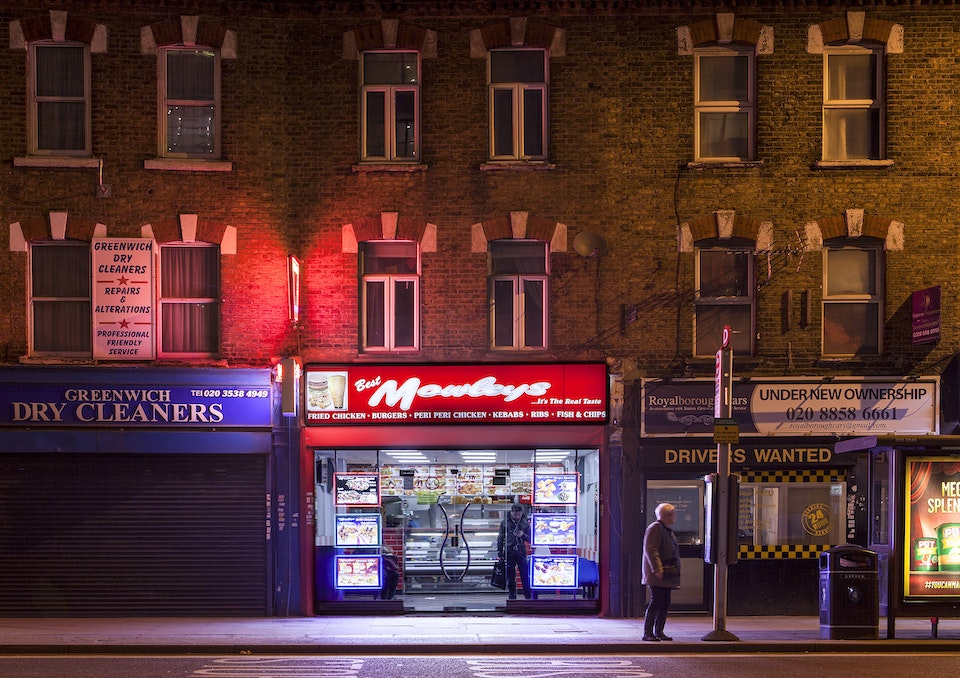 In focus: Morley's or Less

‘Morley’s or Less' was the first major exhibition at Gareth Gardner Gallery, opening to acclaim during the Deptford X art festival in 2019. Three architects – Nick Blomstrand (NB), Jens Kongstad Olesen (JKO) and William Molho (WM) – had spent years photographing takeaways displaying striking similarities to the established Morley’s chain of chicken shops. The exhibition was presented as two grids of photographs, plus a number of large-format prints including Best Mowleys in Greenwich (above).

Lockdown provided a recent opportunity to catch up with the trio, and discover the latest plans for Morley’s or Less.

Gareth Gardner (GG): So Morley’s or Less, what are the three of you up to during lockdown?

WM: I work from home three or four days a week, and do a bit of DIY and online poker. We also want to use our spare time to work on the book project a bit.

JKO: I’m working from home and doing my bit to support Villages Brewery in Deptford! And I’m looking forward to developing the Morley’s book project.

NB: I temporarily relocated to North London. I’m working from home and attempting to perfect my own recreation of the Morley’s Triple M burger.

GG: From the Morley’s or Less project, it’s clear that you all enjoy exploring London. Has that been continuing during the pandemic?

WM: I haven’t really been outside the triangle formed by Mowley Deptford, Fantastic Morley Brockley and Metro’s Ladywell. I did develop a phobia for narrow pavements that force you to be in close proximity with joggers who cough.

NB: I have been far from fake Morley’s territory and have been mainly exploring the parks of North East London. There are a couple of new fake Morley’s finds that we still need to photograph, but they're quite far from where we live. We've spent the lockdown sorting out the archive and have shared ideas about the book, though we haven't really got motoring on that yet.

GG: Have you used the time to research new fake Morley’s?

NB: One was found through an opportunistic online search, a particular keyword permutation we clearly hadn't tried before! And another is a rebrand of a shop near Croydon that we were alerted to via Instagram. It's nice when people find them for us.

GG: And do you think that, even before Coronavirus, the rate of new ones appearing was slowing down?

WM: We are always ready but the fake Morley’s curve has definitely flattened, which makes the odd new one even more of an excitement! Interestingly, the main recent trend is the recent multiplication of Metro’s. They are starting to create a small empire..

JKO: We have an enduring appreciation for any creative fake Morley's additions, especially as they are getting a bit thin on the ground these days. I suppose we have a sort of collector's ambition to try and get a complete inventory of all the shops. The tricky bit is that the total number of is unknown and ever changing.

GG: How was the exhibition for you guys? Do you feel it was worth all the effort?

WM: It was great to take the project further than just on Instagram. Working with the gallery helped us improve on our photography and photo editing skills. It was also an opportunity to meet journalists too.

NB: It was great to see the collection in one room. It makes the project make sense seeing them all together.

GG: Was it a surprise for you, that there are so many fans?

JKO: Not entirely, Morley’s is really popular in South London and most people here know of it. But we were pleased that so many people also found our project of documenting the fake shops entertaining. Interestingly a lot of people have done a similar thing to us – on a much smaller scale – by having a mental inventory of the fake Morley's near to where they live. That's how we got word of many of them actually.

GG: So what happens next? You’ve been talking of a book…

WM: Yes, that’s the plan. The prospect of doing it from scratch we find a bit overwhelming, so we would ideally like to get some sort of support and help from publishers. It would be a good way to end the project since we think we covered the golden age of fake Morley’s, and going forward there will only be a limited amount of updates that we can do on Instagram

GG: And do you think you would do another photographic project together? Or have you just come together as a supergroup for Morley's Or Less?

WM: We came together for Morley's or Less because we shared a passion for niche urban phenomena and dad jokes. We don't have anything new lined up yet, but there might be other project to suit us out there. Luckily, we can still bear each other! Or we could even work together on a commission if someone is seduced by the exhibition or the book.